Hello and Welcome to SMART DOGS‘ blog, where Dogs are beloved Friends, Family Members and Teachers! Whether you already know us from SMART DOGS facebook page, our Plumwood Posse youtube channel, taking Classes at SMART DOGS Training Center, or are meeting us for the first time, we hope our blog helps you Think, Learn, and Grow.  We also hope it helps you understand and use positive reinforcement and two-way communication to build strong, healthy relationships. Our blog emphasizes Learning, Behavior and Health – learning about yourself as you learn about your dog, with your dog, and from your dog; understanding END_OF_DOCUMENT_TOKEN_TO_BE_REPLACED
Meet the Plumwood Posse, my dogs who bring inspiration, delight, laughter, friendship, lessons and knowledge to each and every day!  Shown L to R in the photo below are: Chibi-chan RN, Penelope, GingerPeach CRO-I CGC retired Therapy Dog, Geronimo CRO-I CGC, Rocky CD RA and Piglet P-CRO-III. I coined the name “Plumwood Posse” over a decade ago, the group shown below is version 7.0.  As for their ages and breeds: Chibi-chan is a senior gentleman and a mix of toy breeds, Penelope a ~3 year old rat terrier, GingerPeach and Rocky are ~10-11 year old Golden Retrievers (perhaps with a END_OF_DOCUMENT_TOKEN_TO_BE_REPLACED
In the photo above, Geronimo and Rocky wait in the background while Piglet practices a tunnel. Being able to calmly, pleasantly, patiently “wait” is a crucial skill for Life in the SMART Zone where health, safety, harmony, and low stress levels prevail.  This skill is important not only for your health & stress level but also your dog’s health & stress level. Whether you share your home with 1 dog, or 2 or more dogs, there are numerous situations in your everyday life where a wait is useful.  The dog’s position while waiting might be a stand, a sit or END_OF_DOCUMENT_TOKEN_TO_BE_REPLACED
January 2013 marked the launch of SMART DOGS’ Agility Program!   And launch we did!  8 Agility classes in 7 months: Agility Levels 1 and 2, and Therapeutic Agility* Levels 1 and 2. SMART DOGS’ students are having a blast learning this sport.  And of course, they Rocked! 🙂  Impressive progress by each Team.  The canine students were a wonderful variety of sizes and breeds which added to the fun! Agility Classes are now on summer break due to the Arkansas heat & humidity but will resume with our 2013 Fall Session.  Students are eager to get back on course and END_OF_DOCUMENT_TOKEN_TO_BE_REPLACED
< > 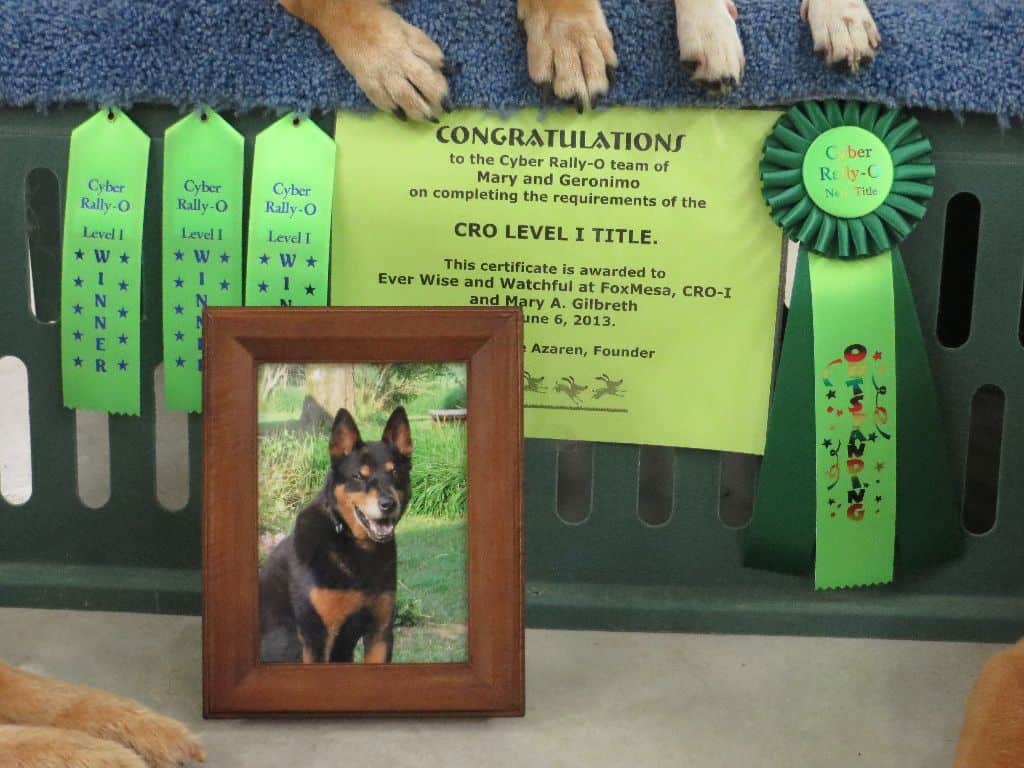 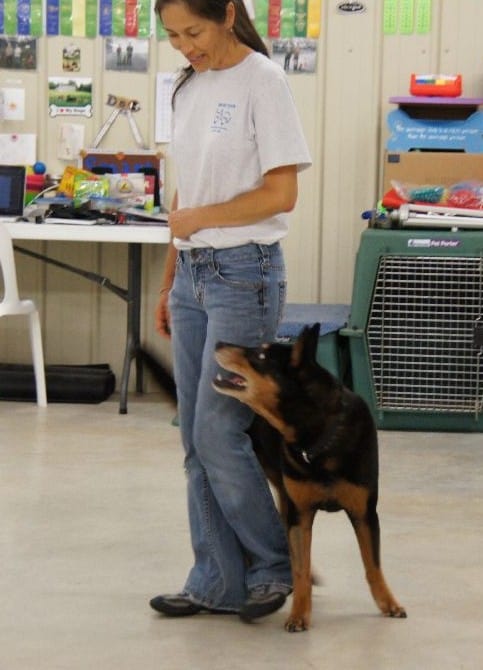 Following a splenectomy and diagnosis of hemangiosarcoma, Geronimo lived one month.  The splenectomy improved his quality of life, we had a beautiful month, he felt better than he had in many months since his symptoms appeared.  Alas, it did not improve the quantity of his life and he left us far too soon, 11.5 years young.

Geronimo’s qualifying runs are shown below and were filmed during his final week.  They were our last training sessions together.

G’ had not practiced heeling or Rally for some time, we had been focusing on agility prior to his illness.  Yet he knew and remembered each station with ease.  He performed them with his shiny eyes, happy mouth, intense enthusiasm, and “ready to rock” attitude.  Yes, his strength was diminished so we took our time.  I watched carefully so he didn’t overdo.

The pics of us shown above were taken May 30th while he assisted me in teaching my Rally Class.  Between many breaks, he demonstrated stations beautifully, he made new friends (heart-warming for any dog but especially for G’ who was once terrified of meeting new humans, going new places, etc.), and had a wonderful time.  He was shining, his happiness was clear.  As much as I hoped he could join us again the following week, I sensed it was his last time to assist at SMART DOGS and that our time together was coming to a close.

I hope to one day share more about Geronimo and who he was, and attempt to convey all that he meant to me, all that he taught me in our 11 years together.  Saying more at this time is too painful.  Until then, I share these videos of my dear friend, protector and teacher – Ever Wise and Watchful at FoxMesa CRO-I CGC “Geronimo”.

*My Thanks to the amazing Jude Azaren, founder of Cyber Rally O.  She gives abundant time, energy and knowledge to the humans and canines of CRO.  Jude, along with the wonderful CRO members, ensures the venue is a supportive and positive one.  Jude and all in CRO (people and dogs), thanks for your support.

The measure of a man is what he does with power.
-Plato